If you’ve been following my work for any amount of time at all, you know I don’t talk about my kids all that much. You may not have even known I had them. I never wanted to put them out there too much and as my following grew, I felt an overwhelming need to protect them. It all started when I posted a photo of my son and someone actually reposted his photo. It creeped me out. So I stopped. But today, and in the past few weeks I’ve felt a need to write about my son. His name is Kaden. He’s in Kindergarten this year. And he has special needs. 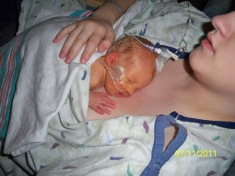 Kaden is like any other 5-year-old in most ways. He pretends to do karate, he loves dinosaurs more than anything else, and will inhale an entire package of hot dogs in one sitting. He’s my youngest. And while I will talk about his older sister Kali one day, today is about Kaden.

Kaden was born on a warm July morning about eight weeks premature. His little 4 lb. 6 oz. body popped out at 32 weeks. I’ve decided it’s because he just couldn’t wait any longer to meet me. I didn’t get to hold him when he made his arrival. He was immediately taken to the nursery and put under an oxygen hood. Soon after, while I was still required to stay in bed, they informed me he would need to be taken to a larger hospital in the city, one with a NICU, to accommodate his needs. I stayed in the hospital while he was transferred an hour away. I can’t express to you the worry or hurt that comes from not being able to hold your child or be there for them in a time like that.

They were kind enough to let me go the next day so I could go see him and be with him. We were there everyday in the beginning. We went to every other day after the first couple of weeks because it became too hard. We still had Kali and she needed us too. For 26 days, the NICU was his home. He was poked, prodded, under bright warm lights. His first 24 hours there, he had a lung collapse due to being on oxygen. He was fed through a tube. He and I napped together doing kangaroo care every time I was there.

After we brought him home, it was much the same as any other baby. Feedings, changings, play time. I thought it might not be so different. But unlike many mothers leaving hospitals, I was given a very different set of warnings and instructions. They told me Kaden would likely catch up physically by age three. And boy did he. At age five, I’m sure he will soon outgrow his big sister. They told me, as a preemie, he’s more likely to have developmental delays and issues. I’ve read about a million online articles and they all say the same thing. Preemies are more likely to have aggression issues, speech issues, ADHD/attention span issues, and sensory issues. Now let me make it clear. These studies all say they are more likely. Not that they for sure will. Or that they will only have one of them or all of them. Just more susceptible.

Imagine my luck. The perfect storm. Kaden has them all. I noticed Kaden’s speech issues early on. He was nonverbal all the way up until he was 4 years old. He pointed or grunted. That’s about all you could get out of him. He knew about 5 words. After he started preschool that improved. His vocabulary is much better than it used to be but still leaps and bounds from where is should be for an average child is age. His short attention span made it very difficult for any type of learning at toddler age. I couldn’t get him to do a puzzle or flash cards or much of anything for longer than about 30 seconds. Because Kaden was born so early and exposed to so much so quickly in the NICU setting, his sensory issues are largely due to his nervous system trying to find balance. He’s in a constant state of either being under stimulated or over stimulated. Kaden craves sensory activities for this. His aggression went largely unnoticed until school began. At first it was “oh he’s just a rambunctious boy, that’s what they do.” Discerning the difference was hard. Kaden frequently hits, bites, and throws tantrums when he doesn’t get his way. And I know what you’re thinking, but you’re wrong. My son received plenty of discipline. All types of discipline. None of it really works. This isn’t one of those problems you can solve with more spankings. Trust me.

Kaden has an IEP at school. That’s an individualized plan for his education based on his special needs. Special needs. Kaden is special needs. My son is special needs. That’s pretty much how I said it in my mind the first time he told me. Kaden is developmentally delayed. At age 5, Kaden doesn’t know his alphabet. He can only count to 10 and he knows 4 shapes. He cannot successfully or repeatedly name colors correctly. That’s a tough pill for me to swallow. My daughter was so easy. She was like a sponge. Absorbed everything. And is now above average in reading and math in 1st grade. So imagine my disbelief when I can’t help Kaden be the same. I know you’re not supposed to compare your children, but it’s difficult not to in this case. 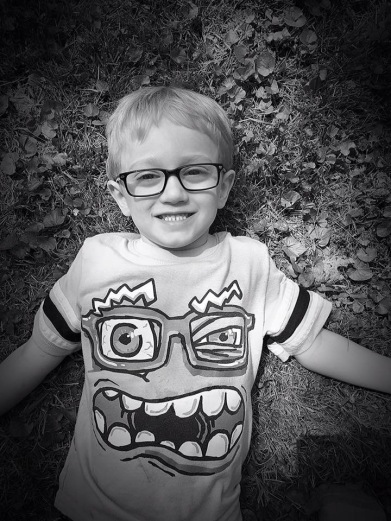 So why have I chosen today to talk about it? Why do I suddenly feel the need to tell you all what I’m going through? Because I’m tired. Because I silently cried on my way to work this morning. Because after being told by Kaden’s special needs teacher this morning that we were going to have to transfer Kaden to a special needs bus so that he can wear a harness, I needed to just scream it all out loud. I needed to let it out.

I know some parents have it harder than I do. I know there are children who’s conditions are far more severe than Kaden’s. And I try to keep that in mind for perspective.

But part of me has all of these questions I keep asking myself and I don’t know the answers to them. And I’m afraid of the answers. Will he ever make friends? Will he ever kiss a girl? Will he need my help all of his life? What about prom? What about driving a car? Will he be in special needs classes forever? This is a mother’s worries.

For now, it’s about the small victories. Kaden successfully identified the letter A and the letter B for me two days in a row. He can’t write them yet but we are working on it. Since having Kaden, I’ve had to redefine success and what success will mean for him. We are only a month and a half into Kindergarten and I’ve already accepted that he may need to repeat it. That’s not failure. That’s necessary. I spend each night going through ABC Mouse modules. Everything is learning. What color gumball is that? What shape is your book? You have an apple for snack. A, a, a, apple. B, b, b, baby. C, c, c, cat.

You wouldn’t know it by everything I’ve said here, but he’s a sweetheart. He has “I miss you” mixed up with “I love you”. So sometimes we’re sitting watching a cartoon and he looks up at me and says, “I miss you, mommy.” I tell him I miss him too. He helps me in the grocery store. He’s a very good helper. He cuddles me and hugs me all the time. He’s quite the goofball. I can always count on him to make me smile or laugh when I need it. That’s the thing about kids like Kaden. They don’t know any different.

Yesterday I took Kaden to the doctor and he was having a really bad day. He was laying on the floor and wouldn’t do anything I asked. The doctor put her hand on my shoulder and said “It’s ok, we understand. You’re doing a great job with him.” And it took everything I had not to breakdown in tears right there. I’ve been bawling my eyes out all morning and even as I write this.

For any mother of a child with special needs, thank you. Thank you for doing the absolute best possible job you can raising you child.

I find I cry a lot more these days than normal. I’ve come to understand it’s ok. Sometimes you just have to cry.

For anyone who took the time to read this, thank you. I rambled on without much of an end goal except to tell you about Kaden. Which perhaps gives you a little more knowledge about me as a person.

At the end of the day, I’m proud to be Kaden’s mother. His success might be a longer and harder road than others but I know everything will be okay. I know it will be worth it. Because this is what I’m meant to do.